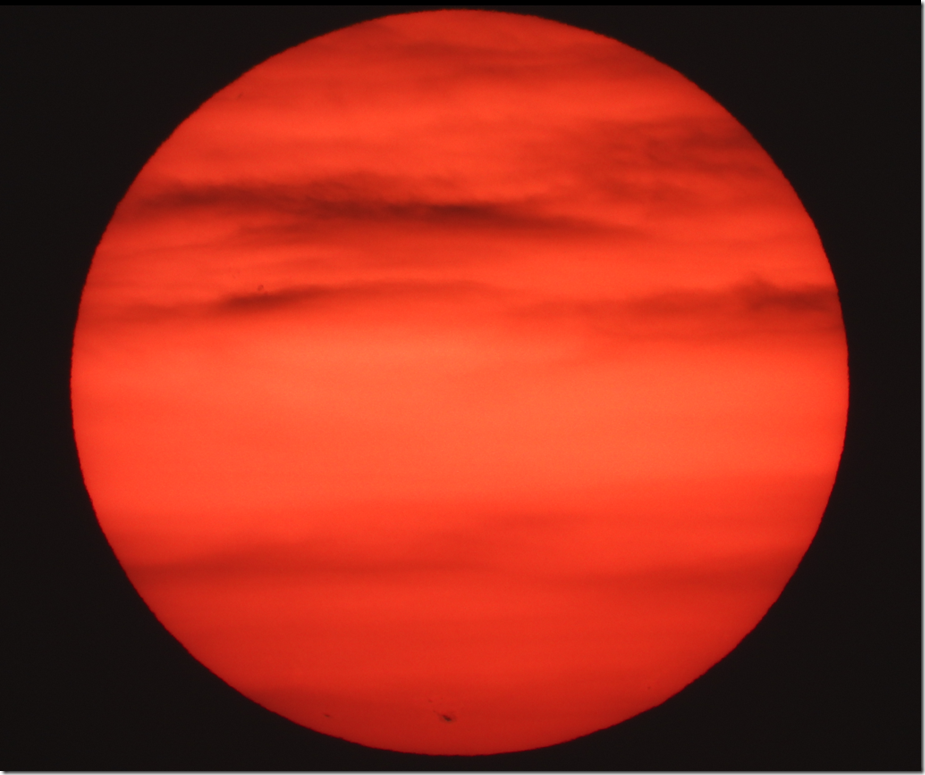 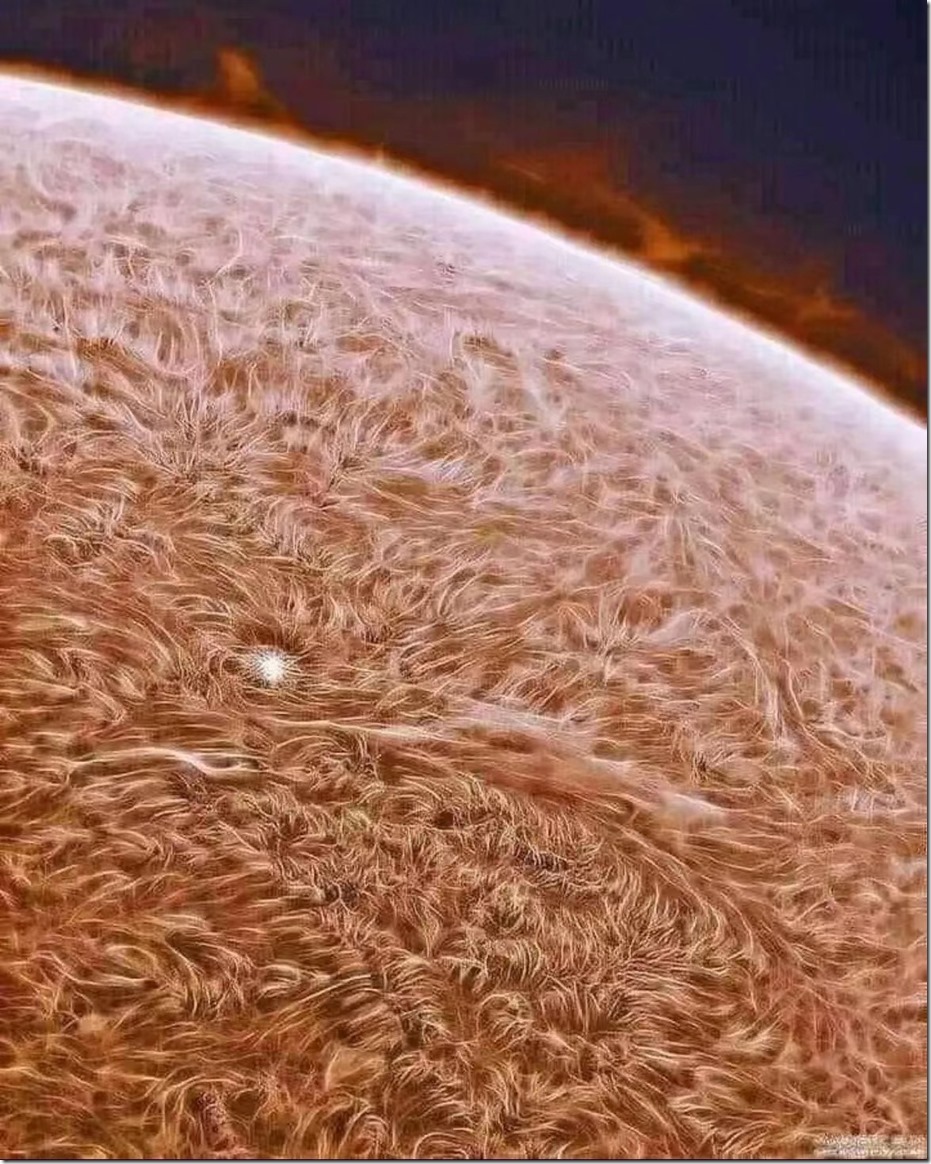 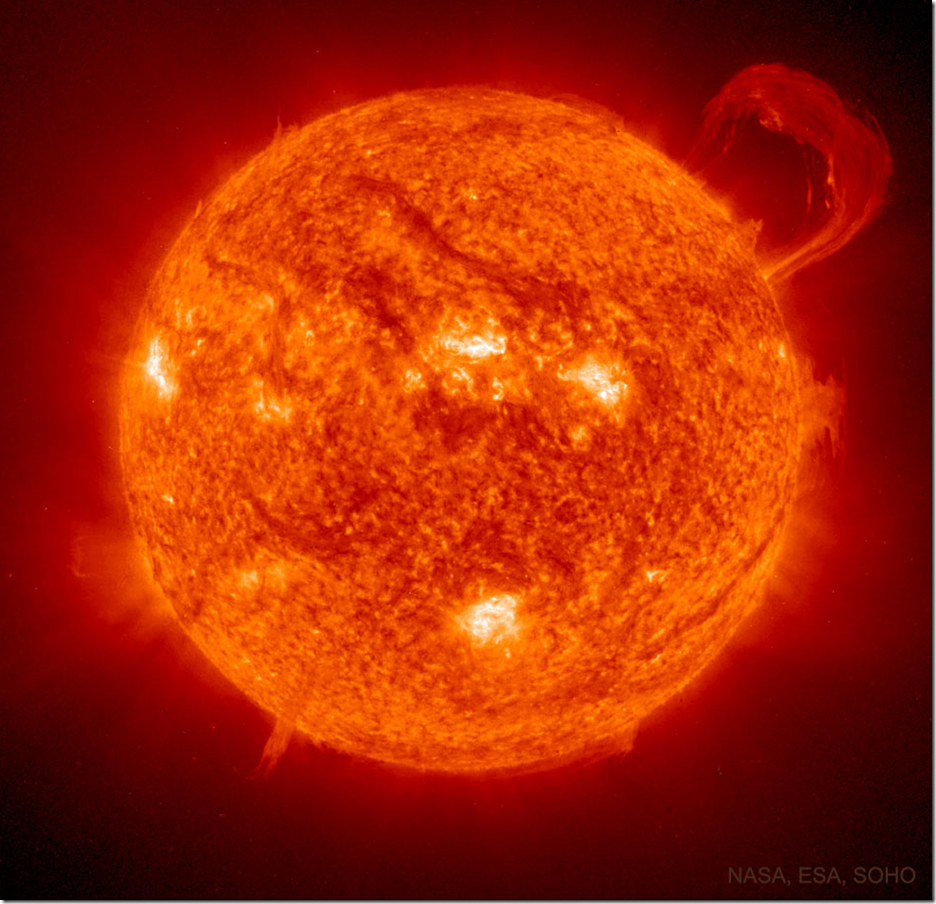 2022 January 30, A Solar Prominence from SOHO (Image Credit: NASA, ESA, SOHO-EIT Consortium)，How can gas float above the Sun? Twisted magnetic fields arching from the solar surface can trap ionized gas, suspending it in huge looping structures. These majestic plasma arches are seen as prominences above the solar limb. In 1999, this dramatic and detailed image was recorded by the Extreme ultraviolet Image Telescope (EIT) on board the space-based SOHO observatory in the light emitted by ionized Helium. It shows hot plasma escaping into space as a fiery prominence breaks free from magnetic confinement a hundred thousand kilometers above the Sun. These awesome events bear watching as they can affect communications and power systems over 100 million kilometers away on planet Earth. In late 2020 our Sun passed the solar minimum of its 11-year cycle and is now showing increased surface activity. 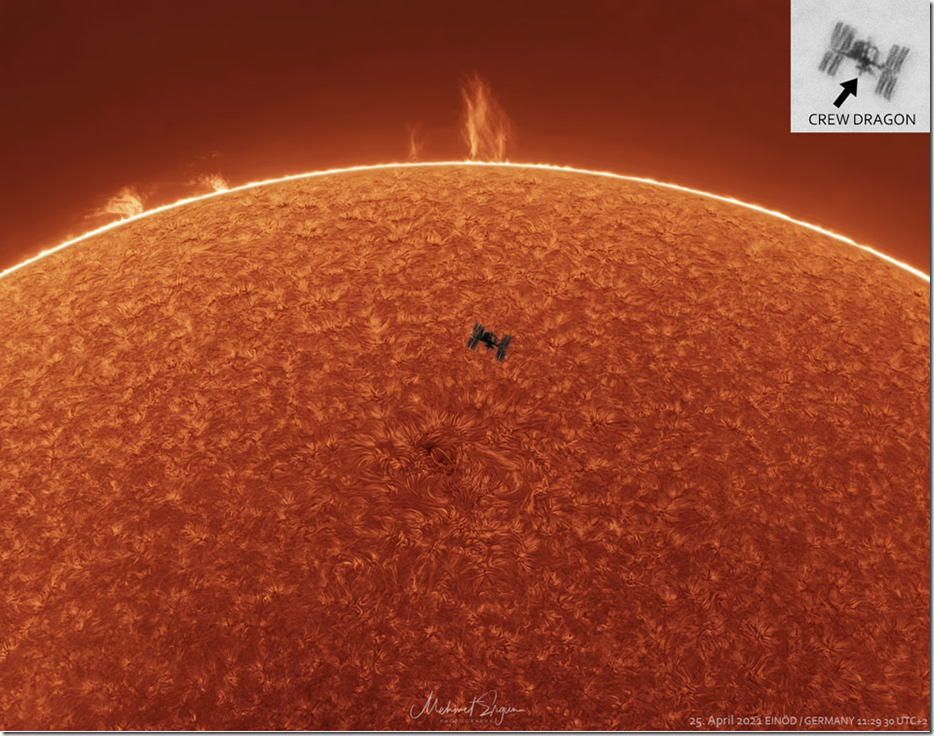 2021 May 4，Space Station, Solar Prominences, Sun ，Image Credit & Copyright: Mehmet Ergün。That’s no sunspot. It’s the International Space Station (ISS) caught passing in front of the Sun. Sunspots, individually, have a dark central umbra, a lighter surrounding penumbra, and no Dragon capsules attached. By contrast, the ISS is a complex and multi-spired mechanism, one of the largest and most complicated spacecraft ever created by humanity. Also, sunspots circle the Sun, whereas the ISS orbits the Earth. Transiting the Sun is not very unusual for the ISS, which orbits the Earth about every 90 minutes, but getting one’s location, timing and equipment just right for a great image is rare. The featured picture combined three images all taken from the same location and at nearly the same time. One image — overexposed — captured the faint prominences seen across the top of the Sun, a second image — underexposed — captured the complex texture of the Sun’s chromosphere, while the third image — the hardest to get — captured the space station as it shot across the Sun in a fraction of a second. Close inspection of the space station’s silhouette even reveals a docked Dragon Crew capsule. 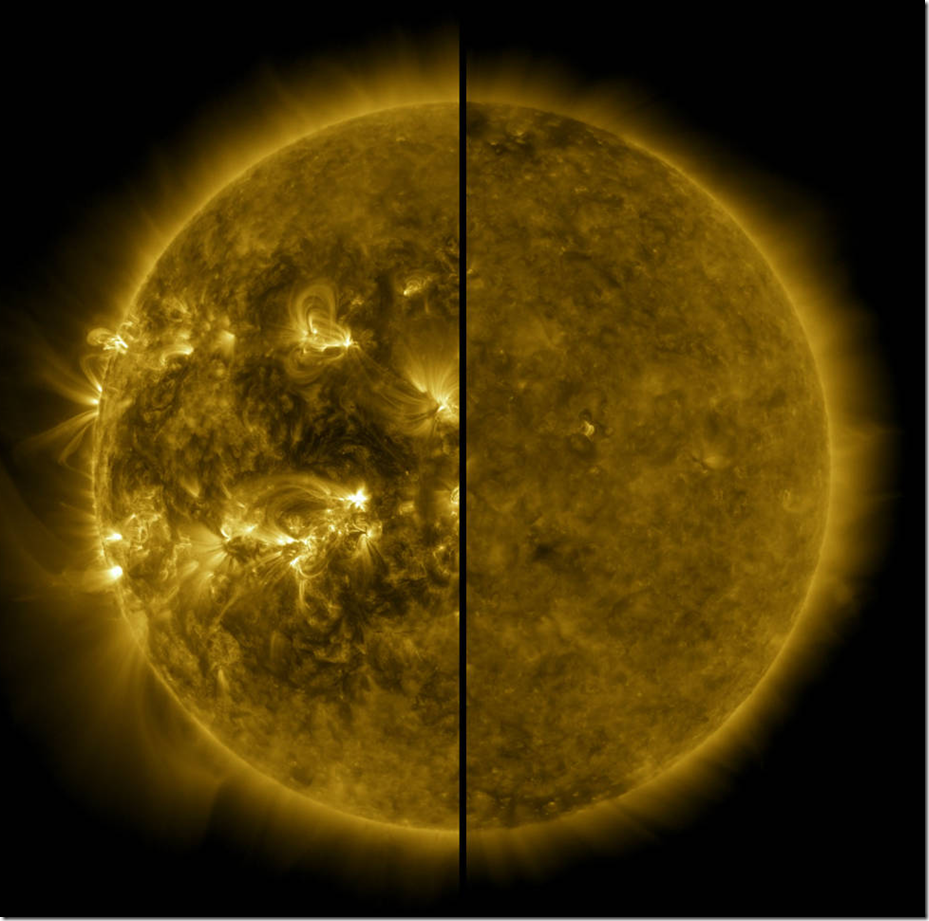 2020 September 17，Solar Cycle 25 Has Begun，Image Credit: NASA, SDO，The general trend of monthly sunspot data now confirms that the minimum of the approximately 11 year cycle of solar activity occurred in December 2019, marking the start of Solar Cycle 25. That quiet Sun, at minimum activity, appears on the right of this split hemispherical view. In contrast, the left side shows the active Sun at the recognized maximum of Solar Cycle 24, captured in April 2014. The extreme ultraviolet images from the orbiting Solar Dynamics Observatory highlight coronal loops and active regions in the light of highly ionized iron atoms. Driving the space weather around our fair planet, Solar Cycle 24 was a relatively calm one and predictions are that cycle 25 will be calm too. The cycle 25 activity maximum is expected in July 2025. Solar Cycle 1, the first solar cycle determined from early records of sunspot data, is considered to begin with a minimum in February 1755. 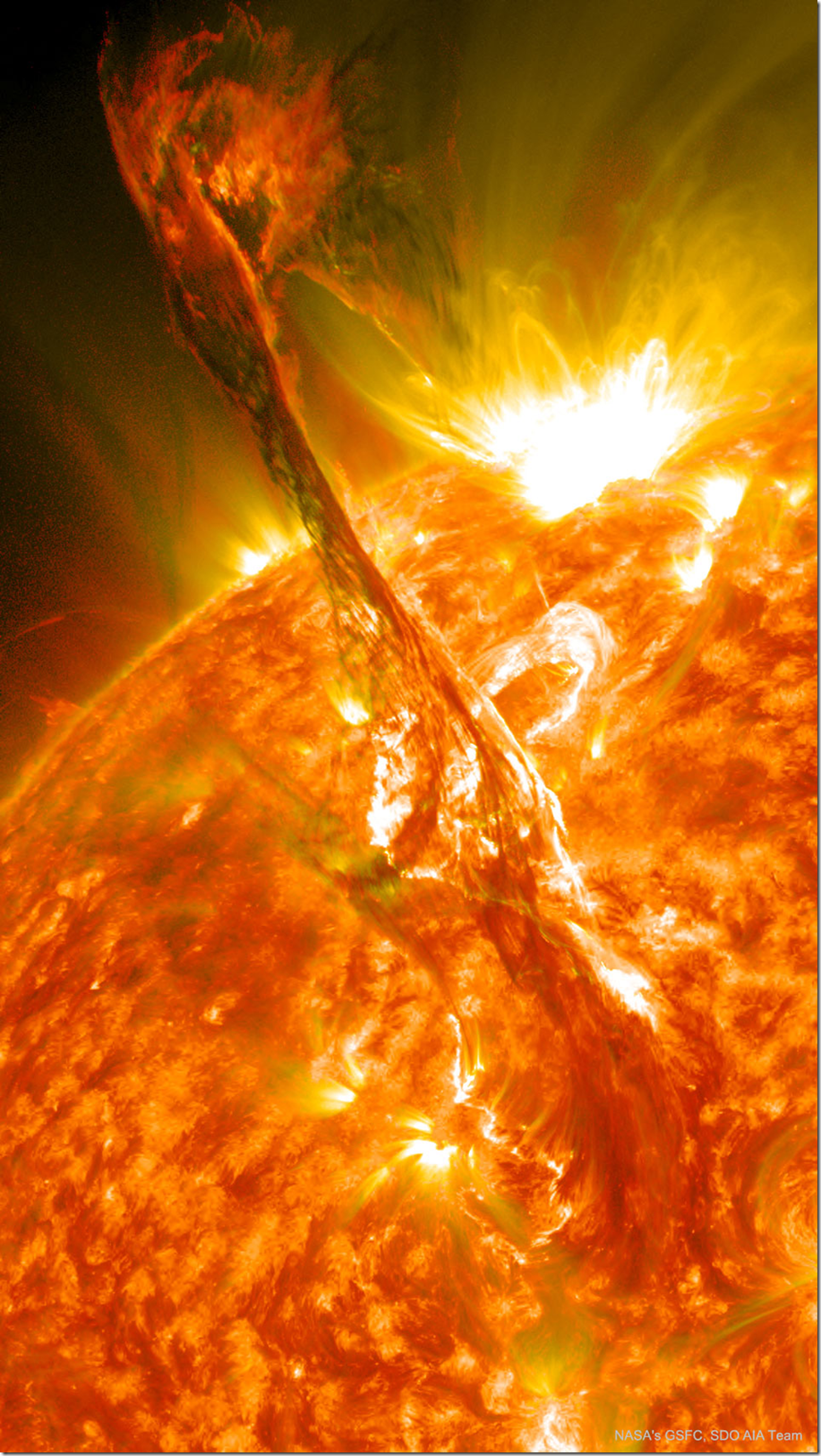 2018 September 16，A Solar Filament Erupts，Image Credit: NASA‘s GSFC, SDO AIA Team，What’s happened to our Sun? Nothing very unusual — it just threw a filament. Toward the middle of 2012, a long standing solar filament suddenly erupted into space producing an energetic Coronal Mass Ejection (CME). The filament had been held up for days by the Sun’s ever changing magnetic field and the timing of the eruption was unexpected. Watched closely by the Sun-orbiting Solar Dynamics Observatory, the resulting explosion shot electrons and ions into the Solar System, some of which arrived at Earth three days later and impacted Earth’s magnetosphere, causing visible aurorae. Loops of plasma surrounding an active region can be seen above the erupting filament in the featured ultraviolet image. Although the Sun is now in a relatively inactive state of its 11-year cycle, unexpected holes have opened in the Sun’s corona allowing an excess of charged particles to stream into space. As before, these charged particles are creating auroras. 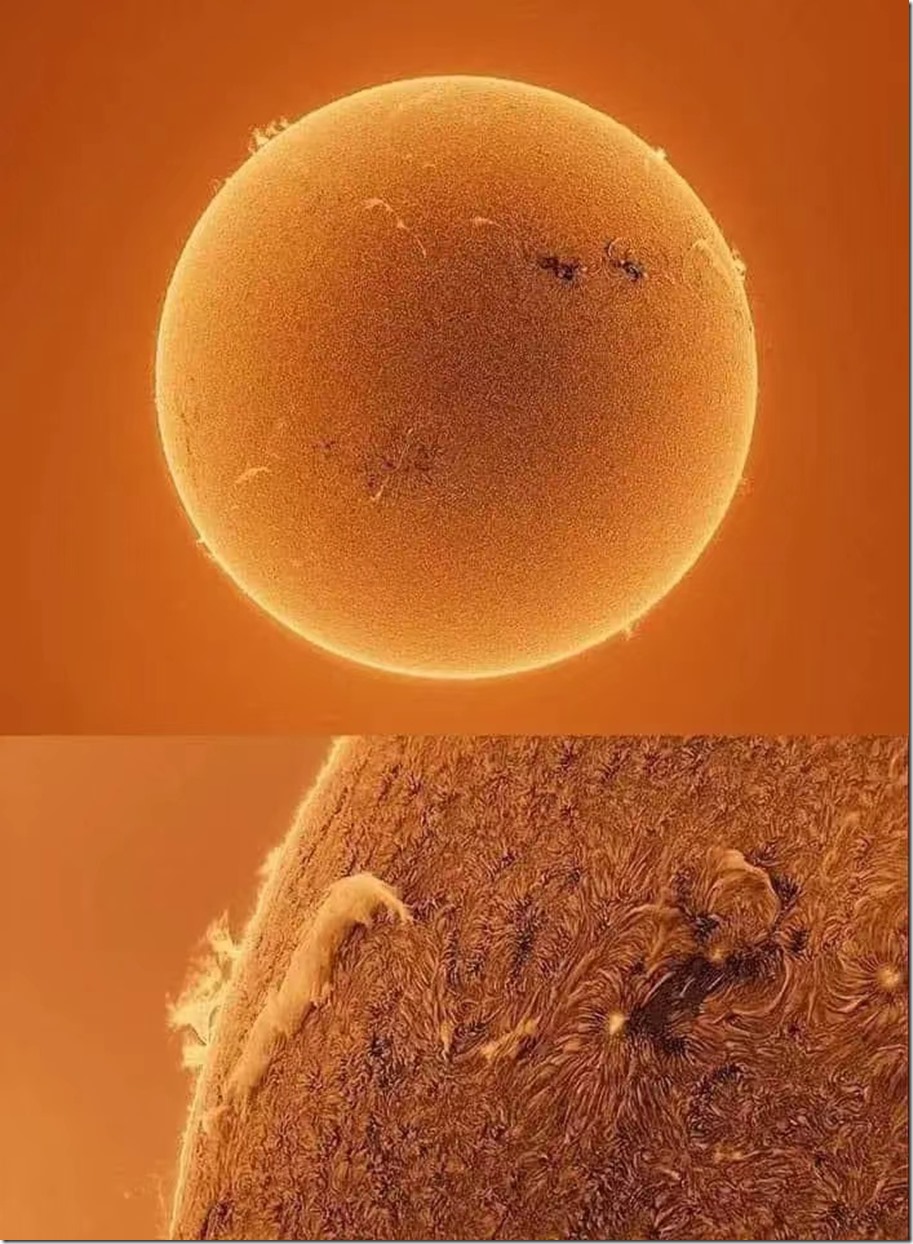